Artist Renée Renard shares her work and thoughts with us in this new article series. How much are we, in fact, emotionally connected to our camera and what makes it so special? Is it just an instrument that has to do the perfect job for the price we paid? Is the newest camera always “better” or do we have regrets leaving “the old one” behind?

On a beautiful morning in March we went for a walk in the countryside. It was the first clear day after a long time and the sun was shining through the trees creating the perfect background for my project: the story of my great-grandmother as a young woman. The Impressionist atmosphere made me feel like walking in one of Claude Monet’s paintings, with ever-changing, vibrant patches of light and shade. My entire photo-enthusiasm ended abruptly when I hurt my knee so bad that it looked, according to the doctor, "like that of a hockey player after championship". 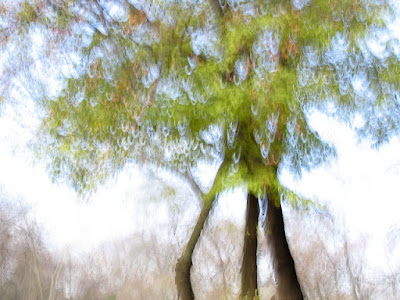 Background for my art project about my great-grandmother

My husband, who is a very wise man, knew exactly how to keep me busy and in a good mood during my convalescence: he placed the two drawers with my cameras and my entire collection of old family photos next to my couch.

The Family-Camera
I live in equal harmony with all my cameras, no matter if it’s the Nikon, the Canon or the underwater Olympus and most of the time we seem to get along very well. I suffered a lot when my first Nikon was stolen from right under my eyes and when the old Olympus broke during my visit in Tunisia. The only one I unconditionally, tenderly loved was my grandfather’s Voigtländer Bessa 66 (also known as Baby Bessa, a folding camera manufactured between 1938-1941 and 1945-1950 by Voigtländer & Sohn AG in Braunschweig, Germany) which my mother gave me when I turned 14. My grandfather bought it in 1938, when my mother was born, and it remained our faithful family-camera over 3 generations, witnessing its entire, often tragic history. 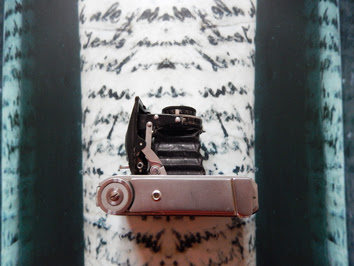 My grandfather’s Baby Bessa placed on one of the letters he sent from Russia
(“From Russia with Love”, detail)

My grandparents who ran a famous tailor shop in town managed to get safely over WW2, but in January 1945 my grandfather was deported to a forced labor camp in Russia. My grandmother and my mother were evicted from their house and the shop was forcefully closed and sealed. Since my grandmother was not allowed to take anything from their own shop, the same night she entered illegally, risking her freedom, to recover the only thing that really mattered: my grandfather’s Baby Bessa, the keeper of the most precious family photos, shot a few days before his deportation…
Holding it again and feeling its familiar shape and that soft, unexplainable perfumed smell, I was instantly sent back to the times when I was the only kid in Art school who owned something “so cool”. I used it until 1989, and when I finally began working with a new camera (it was getting difficult to find the 6x6 film), it felt almost like a betrayal.

Lost and Found Memories
A few years ago I started to organize our entire family archive, recovering photos, documents and letters, including the ones my grandfather sent from Russia. Since then my art project on our family history has been presented in several art museums and galleries across the country. During the exhibitions we organized workshops with children, encouraging them to discover their own family history with the help of old family photos and mini-interviews with their parents and grandparents.
Going through the drawer I was surprised to find an old paper bag containing two 6x6 cm film rolls which I have inexplicable overlooked all these years. The Baby Bessa worked with a 12 exposures, 6x6 cm film, making its users carefully decide what scene they wanted to take, in contrast to our current, “over-photographing” habits. I remember going on a trip to Budapest, Bratislava and East-Berlin in 1980 and having only 2 rolls of film (an average of 8 exposures for each city!). Could we nowadays even imagine dealing with this limitation on a 2 weeks trip?! The 6x6 cm square format of the film registered a lot of detail but was sometimes a real challenge in composing the image, which I learned to adjust by cropping the image in the darkroom. 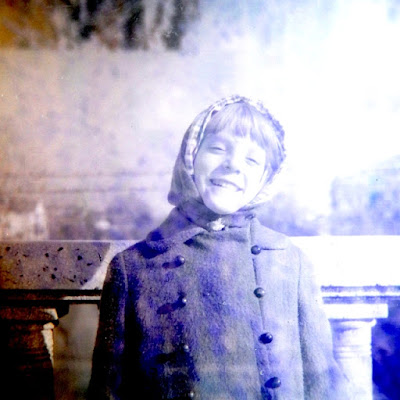 Since I had no quick access to scanning the 2 films or printing the pictures I taped the film to the window, took a photo of each frame and processed it on the computer.  My “digital-darkroom” experience revealed unknown moments of myself and my parents when I was around 5 years old and literally made my heart go faster. At a closer look I noticed that while photographing the film I also captured the current background through its transparency, turning the images into a strange combination of present and past. I could have easily made these colored patches disappear… but don’t we all live in a permanent fusion of the present with the past? 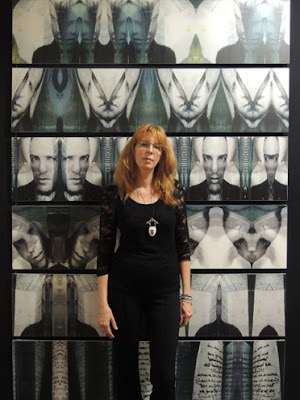 “From Russia with Love”, based on a photo and a letter sent by my grandfather from Russia. Image from my solo-show “A One Hundred Lives Journey” about my family history.

So here am I, the artist who works with family photos from a saved camera, so many years after grandmother’s courageous action... It has once again been close to me, as it has been to my family since 1938. I carefully wrap the Baby Bessa and put it back in the drawer wondering in what moment of my life I will hold it in my hands again. 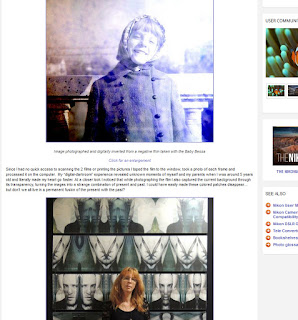